We get just as excited as our customers when a new site is released.

Here is where we like to spotlight recently released or updated sites.

Meet the latest chick to fly the coop...

FORCE has been a Rareheron client since 2002. And boy have they grown in that time. Starting as one person's desire to save women the confusion and misinformation she received when diagnosed with hereditary breast cancer, Sue Friedman and her team have built FORCE to a nationally known and acclaimed organization dealing with HBOC, (hereditary breast and ovarian cancer). Not only does FORCE successfully disseminate information for women to make life changing (and saving) decisions, but they provide support for women and families in communities all around the country, along with online support in the form of message boards, chats and webinars. They also work with research organizations to promote research into the often misunderstood hereditary aspect of the disease.

The website and associated social media pages are vital to their outreach and fundraising, so keeping the site current, engaging, and easy to use is essential.

From 2002 to 2010 we made a number of incremental changes to the site. But by 2010 the organization had grown exponentially, and much more information had been added. It became necessary to rethink how to organize and deliver the information. Also a database was added to handle the educational section of the site, making it much easier for them to add, edit and delete relevant content.

At this time Rareheron also designed a new logo for FORCE to better align the branding to their mission as the experts on hereditary breast and ovarian cancer. 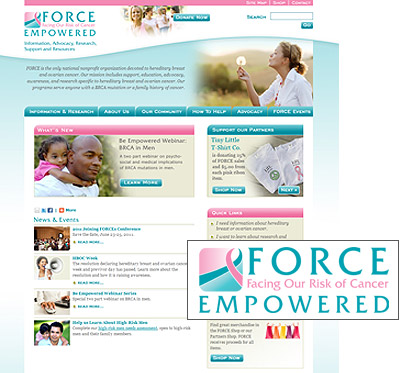 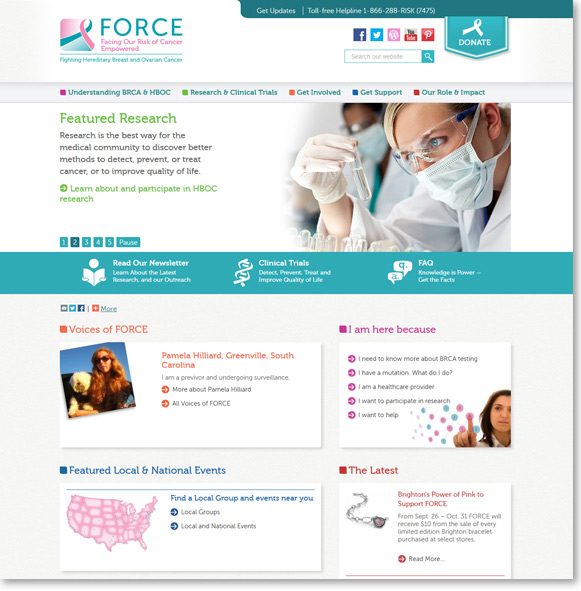 While FORCE was very pleased with their 2010 website, they continued to grow in leaps and bounds, and it was time to expand the site further. We researched their analytics, and took an extensive user survey to find out how the site is being used, and how it can be improved. We then re-organized the navigation based on these results, and using new technologies made it even easier for site users to find the information they sought. More emphasis was being placed on their role in research and advocacy, and they wanted to feature the very real impact they were having on the lives of women and men at risk of HBOC.

They also wanted to create a responsive site that looked great and was easy to use on every kind of device, from phones to tablets to full computers.

Another objective was to give the site a fresh, new look. They wanted the site to be more visually appealing: more images, less text, more colorful, with newer more modern fonts. And again, it was time to revisit the logo to update fonts and give it a slightly edgier feel.

In keeping with new web trends, we also added some infographics, updated all their program icons and have created a number of event icons.

In order to attract sponsorships and grants, they had to look like the big players they are.

Launched in late August 2014, the new site has already been a great success. FORCE has attracted a number of new sponsors and is playing a vital role in enrolling people in research trials to advance medical options for those with HBOC. 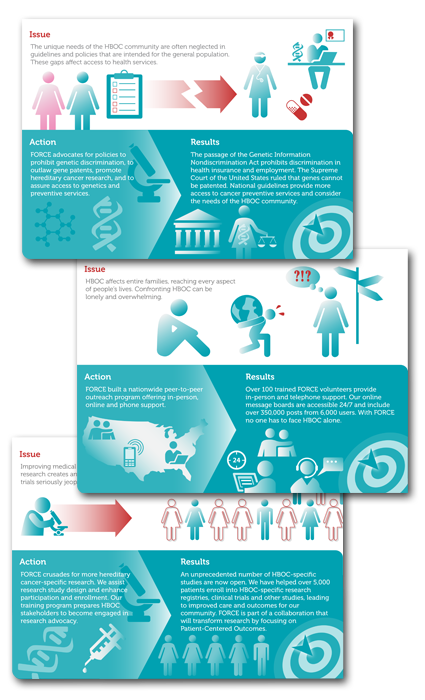 Rareheron is currently working on a fundraising site within the larger site to pull all of their fundraising efforts into one place and get even more people involved. So stay tuned for future developments.

We look forward to continue working with FORCE to advance their mission and feel very fortunate to work with such great clients!